Warning: count(): Parameter must be an array or an object that implements Countable in /home/chrisscheibe/public_html/libraries/joomla/application/application.php on line 481
 Sexy to Go, Volume Five - EasyBlog

This is some blog description about this site 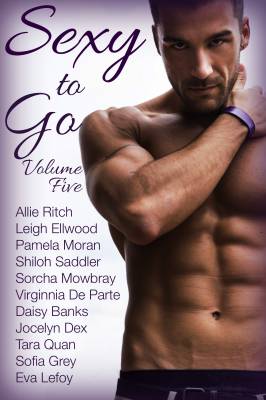 Something is stalking Tessa's dreams. Is Cole, her Dreamwalker ex-lover, willing to risk his heart to save her, or has that bridge been completely burnt to ashes?

Fog swirled in the gloominess, its tendrils stretching and wrapping around Tessa’s legs. She stood on a hill overlooking a wide valley littered with dim lights in the distance.

This was a dream.

She rotated her shoulders and tried to ignore the throb in her left arm. In daylight hours, the gash had appeared as an old scar. But she’d never been hurt there. Except in last night’s nightmare.

Now, the wound ached as if new.

This didn’t mean a damn thing.

She settled on the ground, arms around her bent knees. High ground. Above everything. Away from everything. The better to see anyone or anything approaching.

At least that was her working theory.

Her regular day had been intense. That sense of being followed had strengthened to the point she’d wondered if she’d picked up yet another stalker. In spite of what she’d told Cole in his dream the night before, she didn’t feel as if she’d overreacted.

Someone or something followed her.

And she had no idea why.

She’d kept the lights in her bedroom on and had stayed awake as long as she could, but obviously had succumbed.

A low growl from somewhere behind her sent shivers up her spine and coursing through her blood.

Not working. Okay, then. She was a damn researcher. Find the logic.

This was a damn dream and whatever owned that growl couldn’t hurt her.

The fog thickened. Coiled around her body. Coldness seeped through the thin fabric of her T-shirt and even the heavier denim of her jeans.

She swallowed once. Wake up.

Fur, rough and bristly, brushed her right arm then slid behind her to rub against her left arm.

Her movements slow, she angled her head to glance at the ground to her side.

Yellow eyes blazed from the darkness, held her gaze. A warm wetness scraped her arm, like damp sandpaper. Or a big cat’s tongue.

Cole! The scream stuck in her throat.

She squeezed her eyes closed.

“Shh. You’re okay, sweetheart.” Cole’s words whispered against her ear. His arms tightened around her. “I have you.”

Brightness pressed against her eyelids and she opened her eyes a slit. Light shone from a lamp in the corner. No shadows. No fog. No big cat, or whatever the hell it was, wanting to devour her.

“Hey.” Cole rubbed his big hands up and down her arms. “It’s okay. You’re safe.”

Safe. She nodded. Kept nodding. Lord, she had to move. Adrenaline spiked. She pushed out of Cole’s arms. Shoved her hands through her hair.

Swung around to face him.

God, he was still so damn handsome. So appealing. So hard to resist. Those shadowed eyes. So full of concern and caution.

Could she blame him?

For the concern or the caution?

Yes, she was safe here. Had always found safety with Cole.

Back when. Before her own demons had gotten in her way. In their way.

Available at Amazon, Amazon UK, BN, Kobo, iTunes, and ARe

Volumes One, Two, Three, and Four are also available.

Volume Six, available on June 30th, is up right now for PRE-ORDER!

Tagged in: anthology Dreamwalker Psi PSI Sentinels Sexy to Go
Pamela Moran
Whether painting, out on a photo shoot or writing, Pam has always had a bend toward the creative side of life. Her favorite is when she can combine any of those with travel. Places get into her blood and she loves to explore the possibilities, always with characters and a story in mind.

An astrologer for most of her adult life, Pam has been known to see auras & the occasional ghost. Considering she lives in a haunted house in the mountains of southern California, this keeps life interesting.
http://www.PamelaMoran.com