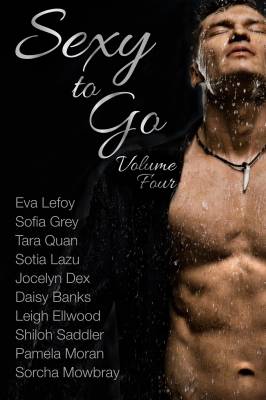 Sexy to Go has ten great stories this month!

Sent to protect a local lawman from a Cartel Dreamwalker, FBI agent Shaye Taggart is shocked to find the tables turned as sexy Sheriff Hawkins walks right into her dreams.

Everett Hawkins stood in the open door of the local diner. He ignored the siren scent of fresh baked bread and instead took his time scanning the interior.

Three in the afternoon and the place was still packed. This is what notoriety will get you. Small, Southern town. Murder. Mexican cartel. People were curious. Curious enough to make the trip. Meant lots of press.

And people of the press.

He was sick of them all.

A tall, willowy redheaded woman bumped into him. “Excuse me.”

He glanced down at her. Took a second look. Blue eyes, as blue as his favorite lake on a bright spring afternoon, stared up at him. Big, blue eyes with a bare hint of challenge.

He frowned at her.

Her chin lifted but one side of her mouth tilted upwards and a slight sparkle lit those eyes. “You’re blocking the door, Sheriff.”

The other part of notoriety. His face all over the damn place. Even without a uniform, every damn stranger to town knew he was the law.

With an inclination of his head, he stepped to one side to let the redhead pass. He also went back to studying the interior of the diner, dismissing her presence.

He had no time for reporters. No patience.

“Sheriff.” Her voice low and husky, she leaned towards him as she stepped towards the door. Her scent, fresh and at the same time exotic, filled him. “I need to talk to you.”

“I bet you do.” He took a step away without bothering to look at her.

She touched his forearm. Electric heat coiled where her fingertips met his bare skin. “It’s about your dreams.”

“Excuse me?” Mimicking her earlier words, he glanced at the hand resting on his arm then into those lake blue eyes.

“Your dreams.” That chin lifted more, but the sparkle in her eyes disappeared, replaced by something with a bit more heat. “Or should I say nightmares? The ones putting those dark circles under your eyes, leaving you vaguely unsettled and worried once you wake up. Too early, I might add.”

“Really?” He studied her a bit closer. The thin, light brown leather jacket she wore stopped below her waist. Although she didn’t carry a purse or a reporter’s notebook, that didn’t mean a damn thing. Especially with modern cell phones and their ability to record just about anything. And that slight bulge under her jacket could be a cell phone. Or something else. “Not much of a leap, considering what’s been happening around here.”

She pulled her hand away and a sudden coolness enveloped his arm.

Strange, but he’d examine that later. From her back pocket she pulled a business card. How, he had no idea, since he’d swear those jeans had been painted on those long legs.

Available at Amazon, Amazon UK, BN, Kobo, iTunes, and ARe.

Volumes One, Two, and Three are also available.

Tagged in: anthology Dreamwalker Psi PSI Sentinels Psychic
Pamela Moran
Whether painting, out on a photo shoot or writing, Pam has always had a bend toward the creative side of life. Her favorite is when she can combine any of those with travel. Places get into her blood and she loves to explore the possibilities, always with characters and a story in mind.