Warning: count(): Parameter must be an array or an object that implements Countable in /home/chrisscheibe/public_html/libraries/joomla/application/application.php on line 481
 iTunes - EasyBlog

This is some blog description about this site 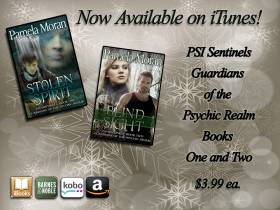 Books One and Two in the PSI Sentinel, Guardians of the Psychic Realm, are now available on iTunes -- just in time for the Holidays!

Stolen Spirit (Book One) is Jake Carrigan and Hannah Dixon's story. Hearing his dead ex-girlfriend's voice in an empty room is enough to make Jake question his sanity. Worse, Hannah insists she shouldn't have died. Now, she wants him to find her murderer. Once he starts digging, can he leave all those questions unanswered? The biggest question, though, is how is he supposed to walk away from her again?

Jake's sister, Rily Carrgigan, has her own story in Blind Sight (Book Two). Gabe Nicholetti, a strong psychic whose visions foretell death, knows he can't save the green-eyed, blonde haunting his sleepless nights. Rily is a dead woman. Or she will be in a matter of days as her past rushes forward to shatter her carefully constructed world. But Rily doesn't believe fate is absolute. How is she going to convince a man who's seen too many die that it's possible to save her life?

Stolen Spirit is available in ebook format at: Amazon, Amazon UK, Barnes and Noble, Kobo, Smashwords, Google Books and iTunes. And in print at: Amazon

Blind Sight is also available in ebook format at: Amazon, Amazon UK, Barnes and Noble, Kobo, Smashwords, Google Books, and iTunes and in print at: Amazon.

I hope you enjoy Jake, Hannah, Rily, and Gabe's adventures! Do drop back by and let me know ...! ~Pam