99¢ Sale on Stolen Spirit and all Sexy To Go Volumes

Posted by Pamela Moran on Saturday, 12 September 2015 in Randomness.... 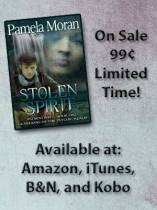 Stolen Spirit (PSI Sentintels, Book One) is only 99¢ through September 15th!

And with all eight volumes of Sexy To Go are on sale through September 27th for 99¢ each, this is a great opportunity to check out the short, sizzling stories before Volume 9 comes out at the end of the month. 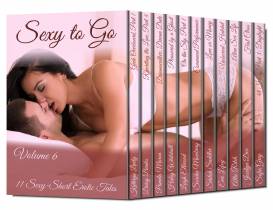 Dreamwalker Lee Jacobs needs answers to who shot him, to who wanted him dead. Can a dream date with sexy Dr. Brynn Keegan, a researcher at the Lucid Dream Center, help him find the answers? Or will that date only lead to murder?

The closeup photo of the woman, caught looking over her left shoulder towards the undercover photographer, lay on top of the stack of other photos on the desktop where Lee Jacobs had tossed them.

Lee leaned back in his chair, rubbed both hands over his face then linked his fingers behind his neck. His gaze locked on the photo.

He knew this woman.

A sense of anxiety, and maybe a hint of annoyance, filled her light blue eyes. Blonde hair, pulled back into a loose tail with a clip at her neck, framed an oval face. She could be anywhere from thirty to forty. Smooth, pale skin. Beautiful in an extremely classic manner.

From the base of his head, he pushed his fingers upwards through his close cropped hair, careful of the still tender wound along the top right side of his skull.

Why the hell couldn’t he place Dr. Keegan in his memory?

The woman worked with Tessa Logan, his buddy and fellow Dreamwalker, Cole Pierce’s friend. Tessa was actually the reason this dossier even existed. Weird happenings at the facility. Tessa involved Cole, who involved him.

Not like he had much else to do, considering his other choice consisted of staying home and staring out the window. No active duty. No idea for how long.

Lee pushed the photos further away.

And damn gorgeous doctor he knew he should know but met a solid ass brick wall inside his head.

He glanced at the photo, narrowed in on her eyes.

Available at Amazon, Amazon UK, BN, and ARe

Something is stalking Tessa's dreams. Is Cole, her Dreamwalker ex-lover, willing to risk his heart to save her, or has that bridge been completely burnt to ashes?

Fog swirled in the gloominess, its tendrils stretching and wrapping around Tessa’s legs. She stood on a hill overlooking a wide valley littered with dim lights in the distance.

This was a dream.

She rotated her shoulders and tried to ignore the throb in her left arm. In daylight hours, the gash had appeared as an old scar. But she’d never been hurt there. Except in last night’s nightmare.

Now, the wound ached as if new.

This didn’t mean a damn thing.

She settled on the ground, arms around her bent knees. High ground. Above everything. Away from everything. The better to see anyone or anything approaching.

At least that was her working theory.

Her regular day had been intense. That sense of being followed had strengthened to the point she’d wondered if she’d picked up yet another stalker. In spite of what she’d told Cole in his dream the night before, she didn’t feel as if she’d overreacted.

Someone or something followed her.

And she had no idea why.

She’d kept the lights in her bedroom on and had stayed awake as long as she could, but obviously had succumbed.

A low growl from somewhere behind her sent shivers up her spine and coursing through her blood.

Not working. Okay, then. She was a damn researcher. Find the logic.

This was a damn dream and whatever owned that growl couldn’t hurt her.

The fog thickened. Coiled around her body. Coldness seeped through the thin fabric of her T-shirt and even the heavier denim of her jeans.

She swallowed once. Wake up.

Fur, rough and bristly, brushed her right arm then slid behind her to rub against her left arm.

Her movements slow, she angled her head to glance at the ground to her side.

Yellow eyes blazed from the darkness, held her gaze. A warm wetness scraped her arm, like damp sandpaper. Or a big cat’s tongue.

Cole! The scream stuck in her throat.

She squeezed her eyes closed.

“Shh. You’re okay, sweetheart.” Cole’s words whispered against her ear. His arms tightened around her. “I have you.”

Brightness pressed against her eyelids and she opened her eyes a slit. Light shone from a lamp in the corner. No shadows. No fog. No big cat, or whatever the hell it was, wanting to devour her.

“Hey.” Cole rubbed his big hands up and down her arms. “It’s okay. You’re safe.”

Safe. She nodded. Kept nodding. Lord, she had to move. Adrenaline spiked. She pushed out of Cole’s arms. Shoved her hands through her hair.

Swung around to face him.

God, he was still so damn handsome. So appealing. So hard to resist. Those shadowed eyes. So full of concern and caution.

Could she blame him?

For the concern or the caution?

Yes, she was safe here. Had always found safety with Cole.

Back when. Before her own demons had gotten in her way. In their way.

Available at Amazon, Amazon UK, BN, Kobo, iTunes, and ARe

Volumes One, Two, Three, and Four are also available.

Volume Six, available on June 30th, is up right now for PRE-ORDER! 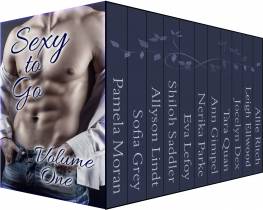 Sample romance in all its flavors in Sexy to Go.

From paranormal to contemporary, you'll find your fix here. Look for a brand new collection every month!

Pulled together through a world of dreams, Lena and Davis might have found the Key to Paradise. Can he convince her to take a chance, to believe in impossible possibilities, to hold on to their dream?

Lena Andrews sat on a light blue beach towel, on warm island sand as a balmy breeze ruffled the loose strands of her short hair away from her face. An exotic, floral hint of fragrance lingered on the air and a brilliant sunset hovered over the horizon with bold reds giving way to golden oranges and falling into the deep blues of the water.

She wrapped her arms around her drawn up legs and rested her chin on her bare knees.

Not too hard to figure this dream out, considering the two feet of snow outside her mountain cabin window, with more falling and not scheduled to stop until morning. The thought of trudging through all of that to get to the ski lodge and work tomorrow morning had had her burrowing down with the electric blanket on high and the covers over her head.

She’d face the snow and the cold once the alarm blared and yanked her from this dream.

Arching her back, she rotated her shoulders then lifted her face to the gentle breeze to let it caress her skin. Blissful. The naked part, though. Hmmm. Puzzling.

“Well, hello.” A deep, gravelly, male voice came from the right, just behind her. Tingles of awareness careened across her skin.

What the – Lena’s shoulders came forward, that first instinctual urge to fold into herself. To minimize her vulnerability.

No. This is my dream, dammit.

She straightened her back and squared her shoulders before angling her head to look over her right shoulder.