Posted by Pamela Moran on Tuesday, 04 November 2014 in ABCs of the PSI World 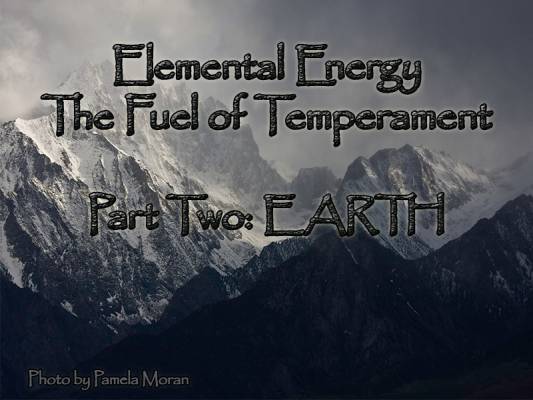 Last week we talked about Fire, this week we're going to explore the element of EARTH.

Earth signs (Taurus, Virgo and Capricorn) are the most grounded of all the signs because their element is the earth. The ground. Soil. Earth signs tend to deal with reality, with what they can touch, feel with their hands. What’s real – that is what they consider important, where their focus remains. They can be analytical, practical, and focused, but have trouble understanding emotions. Passions. Those can’t be touched, can’t be held.

Earth can struggle to understand those whose passions rule them, who lead with their emotions rather than what’s practical. A secret … when they’re at their most dismissive, most disdainful, is when they’re struggling at the deepest level. When their own fear of being overwhelmed scares them the most. I’m not saying to cut them a break, just that a little understanding of that might go a long way in your own struggle to understand these practical, reality based people.

Taurus, the first of the Earth signs, represents the middle of spring, when the Earth is full of promise, of new growth. Steady and true now will provide bounty later. Of course, mix spring rain with dirt and you could end up with mud. As in, stuck-in-the-mud. Taurus, of all the fixed signs, is the guiltiest of being just that. Can you say stubborn? Taurus invented the word. That and Bull-Headed. As with all the Fixed signs, Taurus has a long memory and tends to be unforgiving. But they’re also loyal. And steadfast. Dependable.

Virgo, the most mental of the Earth signs, still manages to stay grounded, still has that analytical thing going, checking and rechecking the validity and reality of ideas. Of the practicality. Virgo is the time of harvest, when all that hard work becomes tangible. That time between summer and autumn, when crops are being pulled from the fields, when the ground is giving up her bounty and change is all around. Virgo is Mutable. Changeable. They are usually exceedingly generous, sometimes to a fault. All that analysis, all those comparisons, all that reaping from the Earth, can lead to Virgo feeling as though he or she has given everything to sustain others but hasn’t received much in return. This may or may not be the case, but Virgos are extremely susceptible to that sense of martyrdom and once it takes hold, tend to share that, also. Still, harvest is about bounty. About change. And of all the Earth signs, Virgo is the most equipped to adapt. The most generous and possibly the most compassionate.

Capricorn, the last of the both the Earth and the Cardinal signs, ushers in winter. Fallow, the Earth pauses. As practical as Taurus and as analytical as Virgo, Capricorn tends to take it all a step further. Plans for the new growing season need to be made, new mountains need to be climbed. Scaled. Conquered. And that’s how Caps tend to see life, as a series of goals to be challenged and successfully met. Then on to the next. With Earth as their Element, Capricorns may be slower and more steadfast than their Cardinal Cousins, but movement is still key. If they mow you over along the way, maybe you should have moved to the side. Gotten out of the way. It’s not that they feel no remorse or that they don’t care, they do. But they can’t let themselves be sidetracked. There’s a lot of planning to be done, a lot to be accomplished, fertile ground to be tilled, before those new seeds can sprout from the ground.

EARTH signs are fully represented in the PSI Sentinels:

Book One of The PSI Sentinels, STOLEN SPIRIT, opens in late April, on Hannah Dixon's birthday. A Taurean, Hannah has always dealt with the world around her through touch. She has always believed what she feels through her fingertips over what she sees with her eyes. As a fairly successful jewelry designer, she loved to incorporate stones and gems (that EARTH element) into her designs. So what happens when she wakes up one morning to discover months have passed while she slept and she can no longer touch anything? Worse, she can't be touched either. She many as well not exist.

In GAVIN'S WOMAN, Calea Fontaine is a Virgo. Grounded, she sometimes wonders if she thinks too much, if she over analyzes things to the point of driving herself nuts. She loves Gavin, but he pushed their relationship aside and she needs time to recoup. Looking for a sanctuary, she heads to the Oregon coast. But a part of her knew he'd follow. Knew he couldn't stay away. Now she worries her bout of self-pity will end up getting them both killed.

Gavin Dunbar, on the other hand, is a Capricorn. As the Liaison between the PSI agency and the government, Gavin is a natural leader. Practical and self-contained, he has an agenda and expects others to fall in line or get out of his way. He doesn't trust his feelings for Calea and has locked them up tight in a box marked 'do not open'. Frustration sets in as she's increasing important to him and in essence becomes his touchstone. He shouldn't need her. Shouldn't feel this way. But all that becomes immaterial when she's threatened by a man whose obsession knows no bounds.

Click here for more on the PSI stories: PSI Sentinels

Are there a lot of EARTH people in your life? Are you an Earth sign?

Tagged in: ABC Archetypes Astrology Elements Modality
Pamela Moran
Whether painting, out on a photo shoot or writing, Pam has always had a bend toward the creative side of life. Her favorite is when she can combine any of those with travel. Places get into her blood and she loves to explore the possibilities, always with characters and a story in mind.